Besides traditional surgery, we also offer a new outpatient treatment with infiltrations, which allows a faster recovery.

Dupuytren’s contracture is a disease of the hand that affects around 30 million people all over the world and consists of a thickening and retraction of the aponeurosis (fascia) of the palm of the hand.

Etiologically, Dupuytren refers to male in 80% of cases. There may be a family predisposition on a genetic basis that may be worsen by certain types of manual tasks or micro traumas repeated over time, or by diseases such as diabetes or alcoholism.

Initially, the disease presents small and painless subcutaneous nodules that progress over time with the formation of aponeurotic “cords” that converge towards the centre of the wrist. These “cords” are inelastic and cause the typical flexion deformity of the fingers. 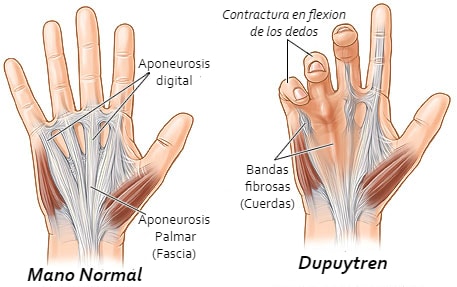 Often there are adherences between fascia and skin, so the last one looses elasticity and the ability to follow the hand movements.

The disease is classified according to the grade of flexion of the affected fingers. 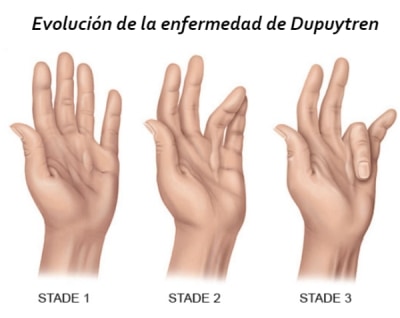 Taking into account that the disease gets worse over time, the sooner we operate the better results we will have.

Surgery is the most common treatment of Dupuytren’s contracture. It is carried out through some “zigzag” incisions extended along the damage with the purpose of removing the fibrous cords that caused the fingers contracture, together with the palmar fascia (partial or total fasciotomy). 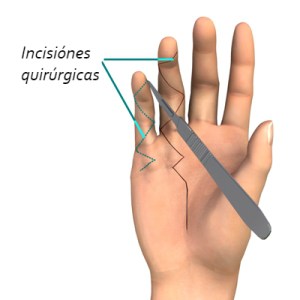 Traditional surgery is generally performed when fingers have already some flexion degrees (15-20 degrees or more) and the use of the hand is limited. At these stages, surgery is the only therapy able to solve the problem completely.

Needle aponeurotomy, also called percutaneous needle fasciotomy is a minimally invasive technique that originally became popular in France more than 20 years ago, although this surgery was first suggested by Astley Cooper in 1822 and later by the same Guillaume Dupuytren in 1832.
The technique consists of cutting the fibrous cord (not its total removal as in the traditional surgery) with a fine needle used as a blade. Therefore, with the needle the cord gets weaker so it will be broken by mechanical force.

This technique is recommended in the early stages of the disease.

Injection on an enzyme

At Clínica Planas we use the latest technique for the treatment of Dupuytren’s disease.

Dupuytren’s contracture is characterized by an excessive production and accumulation of collagen that leads to the formation of fibrous cords, which cause problems to straighten your fingers.

These cords can be treated with a non-surgical method, which consists of injecting an enzyme (collagenase clostridium) to dissolve collagen; and as a result the cord weakens, and even sometimes it completely disappears. 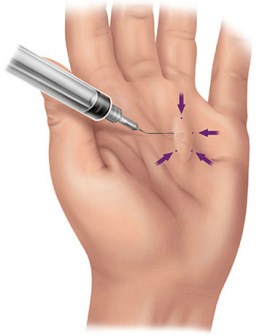 Thus, fingers return to their position and the hand recovers its function.

The pharmacological treatment with collagenase consists of the following:

The drug is injected with a very fine needle into the Dupuytren cord, where 24-48 hours approximately later it dissolves selectively the pathological tissue and allows the surgeon to break the cord with the purpose of obtaining the full fingers extension.

This procedure is carried out in the operating room on an outpatient basis under local anaesthesia and does not require hospitalization.

Which are the advantages of the treatment with collagenase?

In comparison with the traditional surgical procedures, Dupuytren’s treatment with collagenase guaranties a fast return to work and social life, the possibility of using and washing the hand from the same day of surgery, the absence of surgical scars and a fast post-treatment recovery.

Are the therapies used for the Dupuytren’s disease final and conclusive?

“Unfortunately not, because Dupuytren is a genetically transmitted disease and this is “written” in people’s DNA who carry it. During their lives, patients may develop new nodules and fibrous cords in other fingers as well in the treated ones.
Being aware that during his/her life, the young patient may undergo more surgeries, it is necessary to reduce to the minimal invasiveness of the procedure: another reason to trust in the collagenasa treatment”. 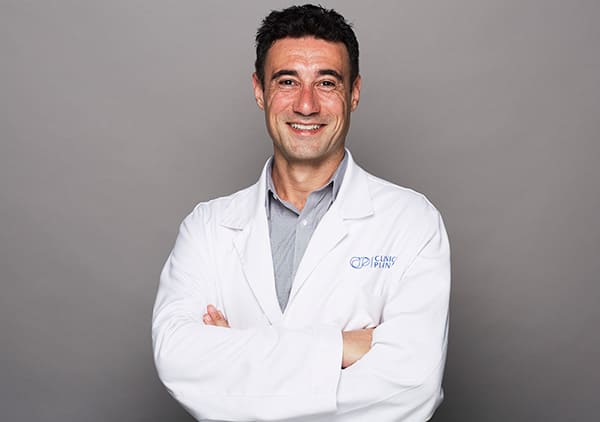 It is very rewarding to return hand movement to the patients and allow them to be able to go back to the activities lost due to the hand limitation.